We tend to think of high office as an honor to be sought and a reward to be desired. Yet no one in high office — such as sovereign or president or bishop or teacher or general — stands worthy before those entrusted to their care. Those who are chosen, having accepted the responsibilities of office, cannot but fail in the attainment of an ideal. Still, they can embrace that failure with wisdom, grace, strength, hope, and patient endurance, drawing forth something good and worthwhile from any situation they encounter.

The honor is also a burden

This thought came to me not long ago as I reflected on the trials of my ancestral homeland during the first half of the twentieth century. The murderous folly of the First World War saw Grand Duchess Marie-Adélaïde of Luxembourg forced from the throne, while the nation itself barely survived. Having only recently regained its rightful autonomy, Luxembourg well might have ended up once again as the property of one of the greater powers of the region. By sacrificing the throne in the wake of the First World War and ceding it to her younger sister, Marie-Adélaïde showed humility and wisdom in an age not known for either.

Like Queen Elizabeth II, Grand Duchess Charlotte was born a “spare” and not an heir, so her education and training did not prepare her in the ways one would expect for a future monarch. She was forced into exile along with her children during the Second World War in order to ensure that the entire royal family would not be exterminated by the Nazi-Fascists. While it pained her to be safe and secure while her people suffered brutally, she worked tirelessly to awaken powers like the United States to the realities in Europe. By saving herself and her family, she ensured the survival of the Grand Duchy.

Even today she is honored as a hero and a saint.

There is a famous photo (and even some video) of Charlotte on the balcony of the Grand Ducal Palace presenting herself to the people upon her return from exile. The massive crowd is seen weeping and cheering at her return, but it must have been a moment of joy tinged with sadness and regret. Surely she would have offered her own life in the place of those who suffered and died, but she was only one human being — a woman and not a titan — and therefore she could not stop the cruel fate dealt to an innocent and powerless people.

I imagine Charlotte crushed under the weight of the failure to live up to the impossibly noble and selfless expectations she set for herself when she accepted the crown. I have had this sort of experience in my own life, and perhaps you have, too. It happens quite often that I feel inadequate before the challenges of life or unworthy to undertake a certain path, but in those moments I think on Grand Duchess Charlotte on the balcony of the Grand Ducal Palace summoning more strength than she imagined possible. She was strong for a people who needed strength. She was fearless and composed for the sake of a nation that needed courage and order in the wake of war. I think that the cheering and weeping crowds understood that she had made of herself an Atlas, mighty enough to bear up the entire world. She was nothing more than a human being like the rest of us, but she became something like a titan in that moment when the world needed a titan.

Like Charlotte the Great, you and I are something like titans. If only we could see this reality in ourselves and in each other — how we would change the world and create something we never knew we could.

The Universe would be a better place because of us — imperfect, weak, flawed, and beautiful beings that we are! 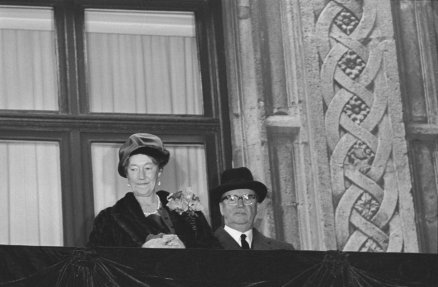 One thought on “A Real-Life Wonder Woman”